There is a strong eggs and breakfast culture in india. But since potatoes are also big part of the cuisine they are surprisingly not very common with eggs at breakfast. There will be omelettes, and bhurjis and all with bread and cheese but not necessarily potatoes. We got acquainted to the morning grease combo of potatoes and eggs through the diners in the US. Hash browns or skillet potatoes on the side. When done well, this can be a satisfying kickstart to the day. Crispy edges on the hashbrowns or the garlic and parsley kick of the chez nanou potatos when they were open in madison started becoming things to cherish. Our friend Gayatri also got hooked to potatoes from marigold kitchen which seem to be skillet potatoes with hint of paprika or pimenton.

Also cutting back to pune i realized that two years ago when i was sitting at one of the oldest breakfast institutions and feeing like a grease bowl meal, there were no potatoes to be found. Dont get me wrong i had the perfect crave quencher yet through other means of eggs and cheese and cream and toast. But it got me thinking what would the pune eggs and potatoes be?

The answer i thought would be batatyacha kachrya with a perfectly fried egg.

Kachrya are thinly cut potatoes that are a very common side to chapatis or bhakris in pune meals. They are better yet when the thinky sliced potatoes are cooked to perfection in an iron kadhai.

At the farmers market we chanced upon some of the seasons first German butterball potatoes. The potatoes looked so beautiful with a thin bruising skin that we knew this would be the day of batatycha kachrya meeting a perfectly fried egg.

We sliced them and added them to water to stop them from oxidizing as well as to remove some excess starch off them. After getting some oil hot and shiny in a cast iron pan we added some yellow mustard seeds. We used yellow mustard seeds than the typical black as they are a bit milder. Then add the sliced potatoes and shake the pan. Cook on low medium heat, stirring around so that the slices dont stick to the pan or one another. We like to initially cover the pan so that the potatoes cook evenly. As they start cooking leave stirring to minimum. 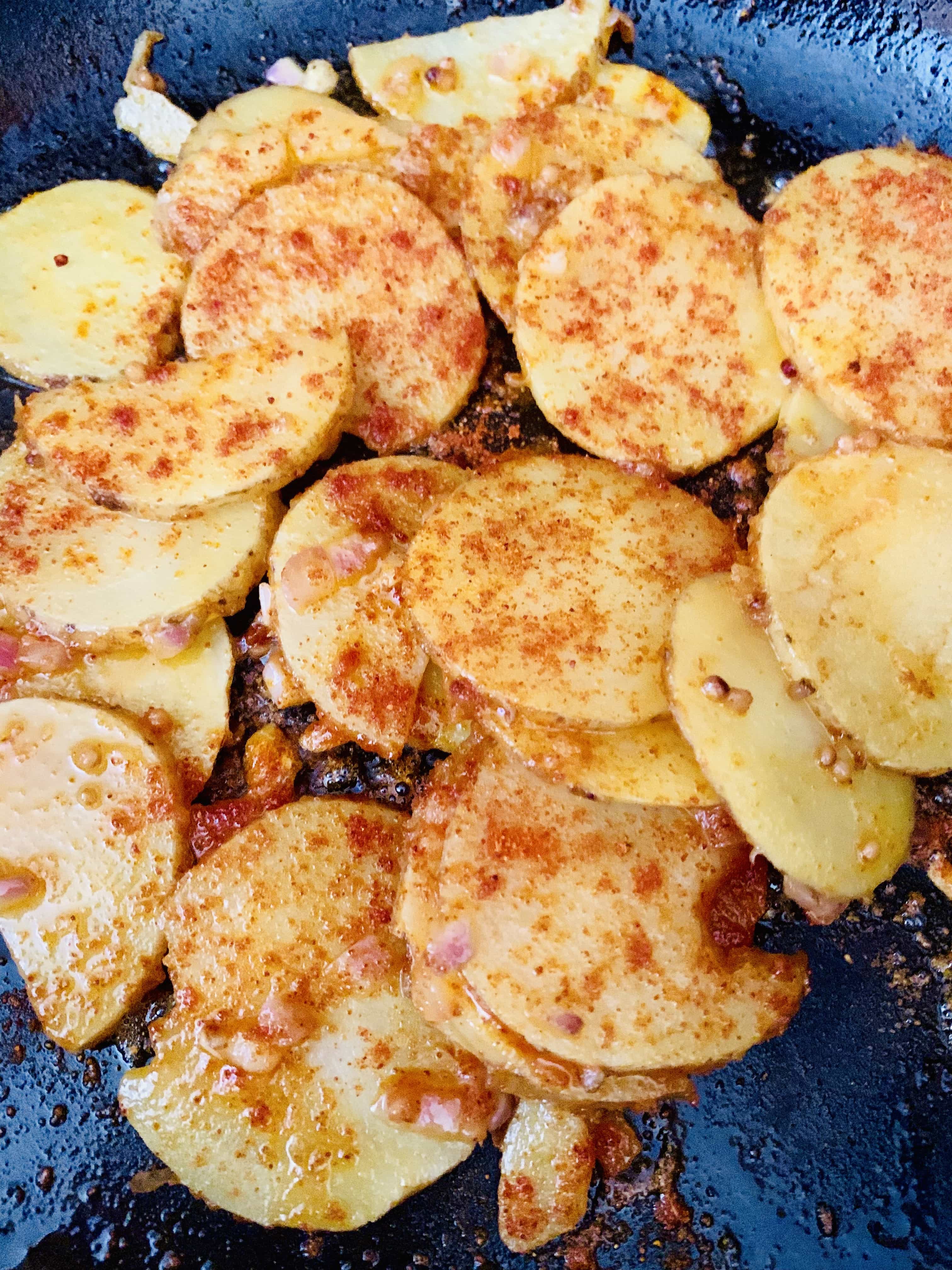 Finish cooking when the potatoes are cooked through and start crisping at the edges. The chili powder also smokes in the oil just a bit but should not have burned.

Then remove the potatoes and use the same pan which will give chili oil fried eggs or a separate pan heat enough oil to float a fried egg. When oil is hot add the cracked room temperature egg from a bowl and reduce heat slightly once it starts sizzling and floating up. Baste the top parts where egg whites are thick with the hot oil on the side of the pan with a spoon. When done remove and drain off any excess oil and season with flaky sea salt. Serve the egg and then the potatoes on the side garnished with cilantro. 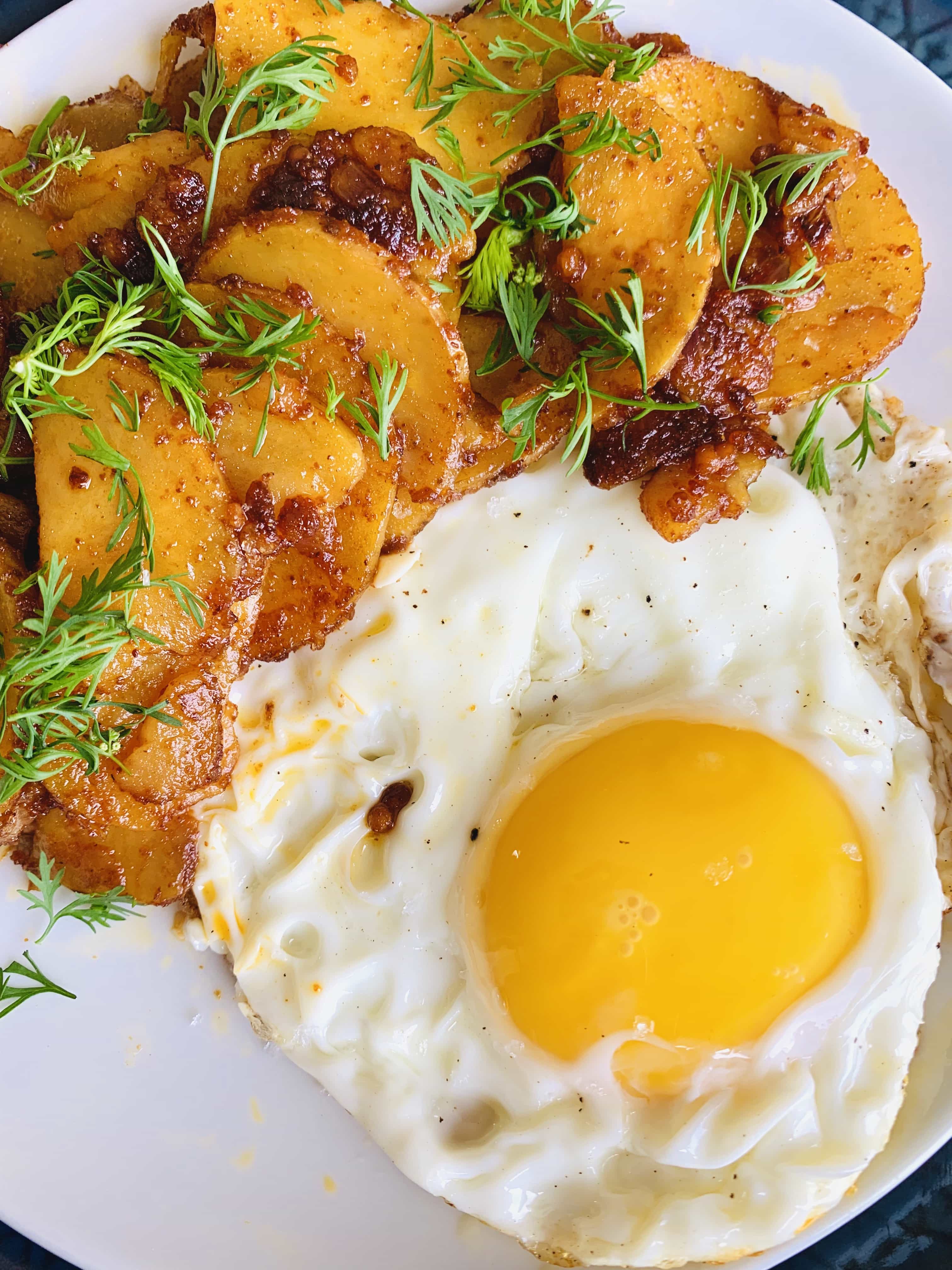